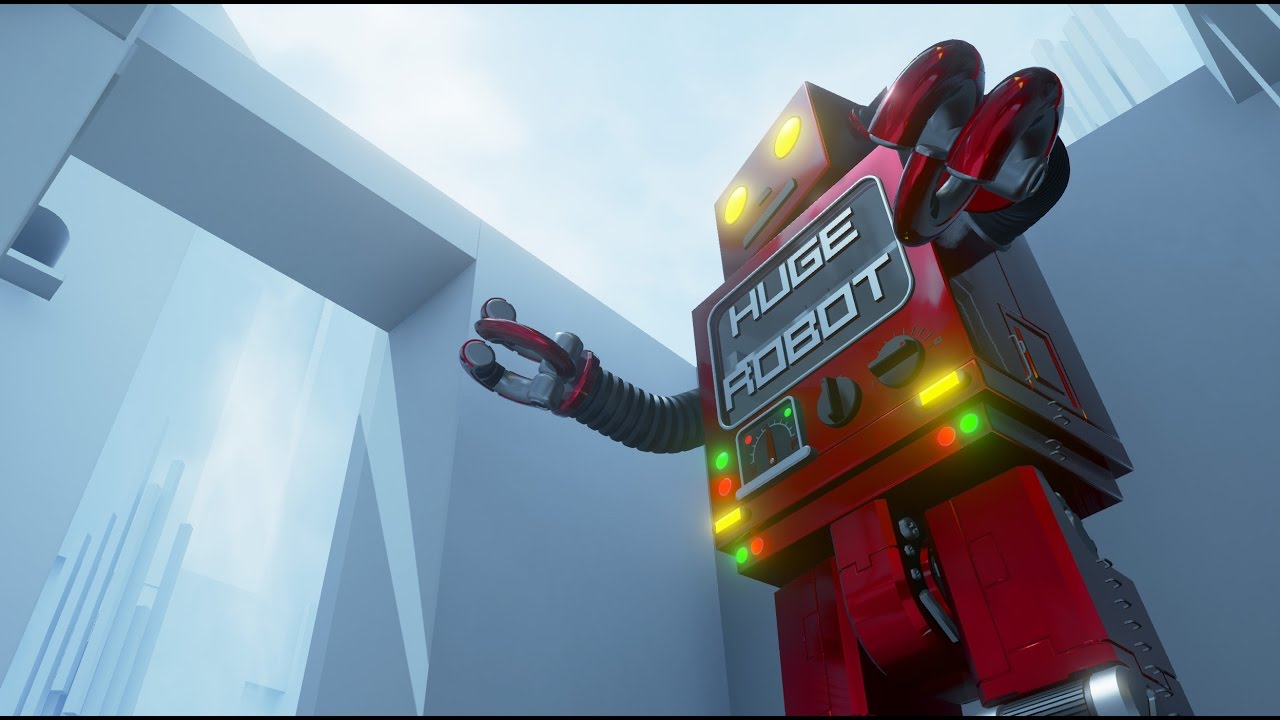 The method has been depicted as super-innovative, because:

In the beginning Freedom Locomotion demo was usable only using HTC Vive, but now the author has put the demo on Steam and it is compatible with Oculus, too… so I’ve been able to try it with my Oculus+Touch setup.

The demo begins with a calibration step, where you’re asked to define your height, Chaperone/Guardian area size and then you have to walk, jog and run so that the system defines some internal thresholds for walking-detection. Calibration is boring, but it lasts only few minutes. Then you find yourself inside a huge playground with a Huge Robot and other funny stuff.

My feedback on this walking method is surely positive. It requires a little practice, but it works and it has really simple mechanics. The fact that it is enabled for both hands makes it usable for left-handed as well as right-handed people. Walking detection is well-made: it detects very well if I’m walking, running or standing still. It’s also quite sensible, so it didn’t require me to fully raise my leg: just a little wobbling was necessary to trigger the virtual locomotion, so it is less tiresome. Walking-in-place reduces motion sickness, but the author dediced to also reduce FOV while the player is walking and this reduces sickness even more, so this is a very comfortable mechanic. There’s also a method to rotate your body in VR without rotating the body in real-life (very useful if you have an Oculus frontal-only setup, for instance): you just press one of the buttons on your Touch controllers (e.g. the B button) and then you slide the controller left or right. Even with this movement (that is very nausea inducing), the FOV is reduced, so it becomes very comfortable. So, I think that this is a good locomotion method for VR.

Some problems I noticed:

Anyway, apart from these problems, I think that this method is a great step towards finding the perfect VR locomotion method.

In the provided demo there are provided two more locomotion types, called Dash-spot and Blink-spot, that are very similar. These methods are some kind of teleported-walking: I mean, every 500ms or such, you make a little teleportation in the direction that is decided by your thumbstick. Teleportation distance is decided by a step-length that is decided by how much you raise your controllers. So, it’s like making little fast jumps, step by step: since there’s no continuous walking, there can’t be motion sickness. These two methods are less natural than thee Freedom Locomotion (whose actual name is CAOTS, but I prefer Freedom Locomotion), but they don’t require you to walk in place, so they’re surely less tiresome. Honestly I found these locomotion systems interesting, but also very very annoying since they’re not natural at all.

About the demo itself: nice, but has too many writings (no one has the willing to read stuff, so I didn’t get lots of things of it) and some annoying interactions (you can even climb the Huge Robot using your controllers and this is cool, but after a while you’ll inevitably fall to the ground because climbing is not perfect and you’ll feel the urge to throw your Touch out of the windows). Cool stuff are trying to suicide yourself, but even for this the author reduces the FOV, so it is reduced not only the sickness, but also the adrenaline of falling. Uff. I liked some elements: the door to be opened; the interaction engine, so you can take cubes with your hands and launch them towards other cubes; the enormous robot that makes everything so Japanese :D.

One last thing: if you’re struck in the demo and you don’t know how you can change the settings (like the Locomotion Type, to try all three methods), just press your menu button on your left Touch controller and a super menu will pop-up, making you choose everything.

The final feedback is that Freedom Locomotion System is a really interesting locomotion method and that you all should download its nice demo on Steam to try it out! And don’t forget to download also ImmotionRoom and try it, too! 😉